Shad “Bow Wow” Moss and Ciara Wilson dated as teenagers. The two were together for years, then they were reportedly engaged, but they broke up suddenly.

Ciara has refused to talk about her relationship with Bow Wow, or even mention his name publicly.

Ciara continued to date post-breakup, and eventually settled down with her husband, NFL superstar Russell Wilson.

Bow Wow was engaged to Love & Hip Hop Erica Mena, who is the one accusing the rapper of beating her.

Now Erica is opening up, and calling out Bow Wow for being an abuser.

She even spilled the tea on Ciara’s alleged abusive relationship with Bow Wow.

Check it out below: 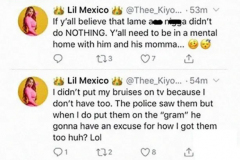 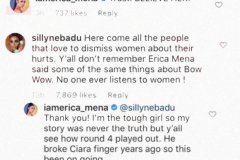 If I’m Russell Wilson, I’m not happy to hear Bow Wow messed up Ciara’s finger back in the day.

Bow Wow better hope he doesn’t run into Russell, he may get a stern talking to if he does.

Check out some pics of Ciara below: