The Chiefs selected Georgia’s Mecole Hardman in the second round with the 56th overall pick on Friday. They traded up in the round to select him, sending picks Nos. 61 and 167 to the Los Angeles Rams.

Hardman is a burner in the mold of Hill. He ran a 4.33-second 40-yard dash at the NFL scouting combine.

“We like, obviously, his speed, but he’s more than that,” Chiefs coach Andy Reid said. “He can play inside. He can play outside. He did both at Georgia. And then he’s a phenomenal returner, arguably the best returner in the draft.”

Hardman might well be the replacement for Hill. Unfortunately for the Chiefs, he comes with a bit of controversy as well.

Hardman tweeted a multiple homophobic sentiments from 2012-16, largely posted before he joined the Bulldogs in 2016.

“That’s a long time ago,” Hardman told the Kansas City Star’s Brooke Pryor. “That’s probably immature of me at the time to tweet things like that. That’s my fault for doing that. I came a long way from that. That’s not who I am today.”

“He was a kid,” Reid said. “He said some things he shouldn’t have said. Kids do that. I’ve had a lot of kids, and I’ve got a lot of grandkids. They can surprise me with some things. That’s part of growing up.”

Check out the tweets below: 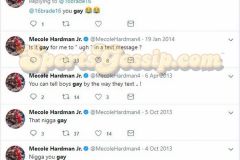 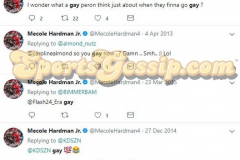 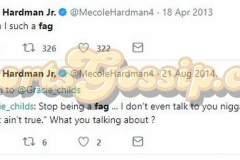 Seems like the Chiefs don’t care who they play as long as they’re fast as lightning.