Kevin Durant Received a Gift on Behalf of All Canadians

The Canadian NBA fans are really starting to look like awful people.

Video of hecklers screaming at Stephen Curry’s parents surfaced on Twitter, creating more social media backlash at a Raptors fanbase that already took a hit for its reaction to Kevin Durant’s injury.

There is something wrong with these fans, and as much as I’d like to see the Raptors take home its first NBA championship, they kind of don’t deserve it after all of this craziness.

Might a peace offering help them out? I mean these are the same people who cheered when KD went down with a devastating injury.

Looks like KD was sent a gift from Raptors fans.

Check it out below:

“I hereby apologize on behalf of Canada — prayers for recovery.”

A fan sent flowers to the Warriors apologizing for Canada’s Kevin Durant cheers.

Take a closer look at the card below: 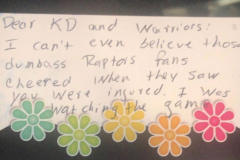 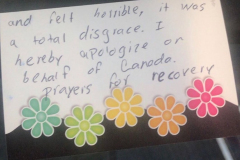