Klay Thompson appears to be trying to get back with Eiza Gonzalez, the actress he was seen with while he was dating his now ex-girlfriend, Laura Harrier.

From what our source is telling us, it shouldn’t be too hard.  Eiza showed up to an NBA Finals game in an attempt to get his attention after Laura unfollowed him.

The source, a member of our growing SG Army, laid out all the back-and-forth surrounding this love triangle and we’re going to let them tell it:

As you know, Laura unfollowed Klay before Game 1 of the Finals. The next day Klay unfollowed her, but tried to win her back by following her again and liking her pics. Laura wasn’t having it and didn’t follow him back. She even deleted one of the photos he liked. Klay cheated on Laura multiple times and lied to her throughout their relationship. She was 100% done with him. 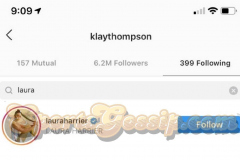 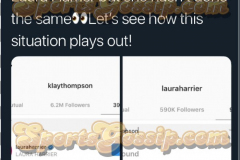 Things get really creepy when one of the women Klay messed around with while he was with Laura, Eiza Gonzalez, likes a picture of Laura on makeup artist Dana Delaney’s IG. Eiza had been trying to get Laura’s attention for a while. Laura wants nothing to do with Eiza for obvious reasons. “Hey, I messed around with your boyfriend but pretty pic!”

At the SAME time she’s liking Laura’s pic on IG and despite Klay trying his best to win Laura back, Eiza kept pursuing Klay. She even asked to go to a Finals game with her friend, Elsa Collins, wife of Warriors assistant coach, Jarron Collins. Here she is sitting with Elsa at a game. Eiza has been throwing herself at Klay for months.

Klay finally unfollows Laura when ishe makes it crystal clear to him she’s done with his lying and cheating and will never go back to him.

So today Klay finally likes a pic of Eiza. He’s still trying to be a bit on the download because he chose a pic from a month ago though he liked it today. Klay and Eiza are perfect for each other. She knows that he’s a liar and cheater and continued to show up at this games and pursue him. Eiza has the surgically enhanced face and body of an IG model but with the actress clout and salary–most importantly neither one of them is into love or monogamy. I’m sure Eiza isn’t the only girl in Klay’s offseason hoetation…it’s very difficult for him to stay away from the IG model. Laura’s friends and family are thrilled that she dumped him and is leading her best life on vacation in Europe. 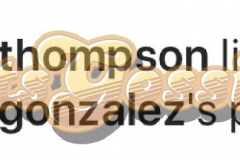 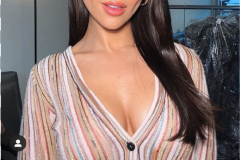 One more update. Klay JUST unliked Eiza pic. These are the games this very immature games this grown man plays with women.

Well done.  If you have something to share and can put together as well as this post was put together, send it our way.

See more of Eiza below: