The New England Patriots wide receiver graduated from Kent State University this weekend, finishing the degree he started working toward in 2006.

Two days prior to Saturday’s ceremony, he said he wanted to set an example for his daughter and keep a promise he made to his parents more than 10 years ago. On Saturday, he let the world know that he officially completed that goal.

Scroll thru to see the video:

Then on his story, he provided an enthusiastic “Let’s go!” before taking a trip down memory lane and sharing his post-graduation meal preference. 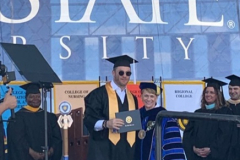 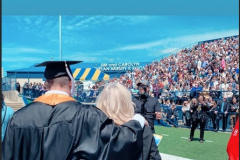 Several current and former teammates and friends chimed in with a mix of supportive and sarcastic comments.

“Who ever knew it could take 14 years to graduate college?” Tom Brady wrote.

Congrats on 14 years of college!!! That’s got to be another record you set!! 🤣

Congrats to Edelman on his unbelievable 2019.