Aaron Judge is a big star thanks to his success on the field with the Yankees.  Despite this relatively new fame in his life, he hasn’t landed a himself a famous leading lady.

Judge instead seems to prefer the company of “regular” women.  His current girlfriend for example is a woman he’s known, and dated off and on, since high school.

This willingness to date everyday women has some believing they have a shot with the Yankees star.  One fan in particular seems to be working really hard to get noticed and it appears to be working.

She first caught his eye back in spring training when she asked him for an autograph.

Since then she’s followed the Yankees on road trips, tagged him in social media posts and is the woman he was flirting with at his Adidas event earlier this month.  According to her account of things, Judge hopes to see more of her. 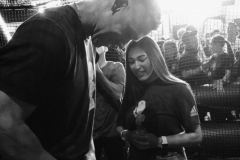 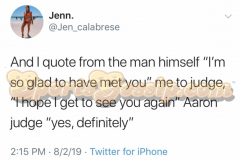