It looks like Saints running back Alvin Kamara and stripper Just Ace are back together.

The two apparently split up not long after her birthday when she accused accused him of cheating.  That happened around the same time that she put Kamara on blast for the size of his manhood.

The two were spotted out at Apres in New Orleans following the Saints Sunday Night Football win over the Cowboys.

Here is what our source had to say about them:

She unfollowed his friends who followed her and they unfollowed her too. So everyone was thought no way he would take her back after she posted those disrespectful posts.

In the pictures and video we were sent, Just Ace can be seen in the bottom right of the pics with the white top on.  Kamara is the man of the night and can be seen standing on an elevated surface. 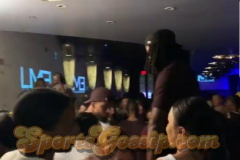 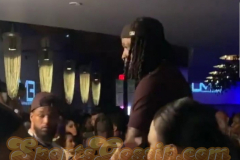 It looks like Just Ace can do and say whatever she wants.  So long as she doesn’t break the alleged nondisclosure.  Here’s the video:

Alvin Kamara and His Stripper Girlfriend Just Ace at the Club

See more of Just Ace below: