Instagram model Emmy Lou decided to post a picture of herself in Antonio Brown’s Raiders jersey on Monday.  Her picture was an attempt, albeit a very late one, to change his mind and get him stay in Oakland.

The post didn’t change AB’s mind, had he seen it before signing with the Patriots it might have worked.  As it is, AB is getting ready to play for the Patriots in Week 2.  But the post did get Brown to slide into her DMs and let her know that he thinks she’s sexy.

That is quite the argument to stay in Oakland.  Although it’s not possible for Brown to return, it is possible for him to reach out to Emmy Lou, and that’s just what he did.  Brown slid into the DMs with a “U sexy sexy.” (see below)

Probably not what his baby momma would like for him to be doing with his free time! 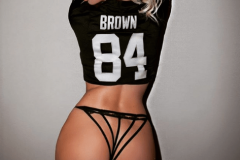 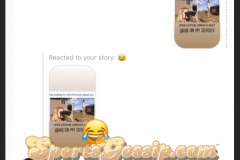 We’ve said it before and we’ll say it again.  Antonio Brown loves drama and will take it in all shapes and forms, on and off the field.  My man can’t get enough.

See more of Emmy Lou below: