Khloe Kardashian Explains Why Tristan Thompson’s Face Was Blurred Out

Khloe Kardashian took to Twitter to react to Tristan Thompson’s face not being shown while he carried their one-year-old daughter True on the latest episode of Keeping up with the Kardashians.

There was no official E! footage shown of the 28-year-old Cleveland Cavaliers player, and the only time he was shown was in a video recorded by Khloe as his face was obscured. 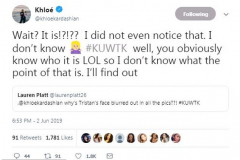 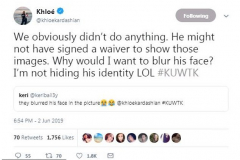 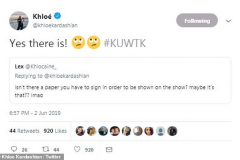 The episode was filmed before the couple split for good amid the Jordyn Woods cheating scandal in February as Khloe confided in BFF Malika Haqq as she reflected on the fact she struggled to trust him again following the scandal as she said:

Clearly if his face is blurred, Tristan is no longer playing ball with the Kardashians, or more specifically, Khloe.

For his sake hopefully they don’t totally erase him.

Check out some pics of Khloe below: