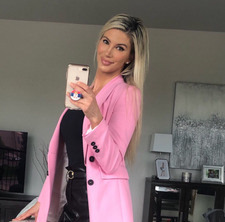 We received a DM back in January tipping us off to the rumor that Vikings head coach Mike Zimmer was dating a former Maxim cover model.  Her name is Katarina Elizabeth Miketin, although she appears to have modeled under the name Elizabeth Audrey.

Flip the Page to Zimmer and his rumored new girlfriend: