David Ortiz has been transported back to Boston on Monday night and underwent a second successful early morning surgery upon his arrival.  He is expected to make a full recovery and has been walking around per doctors orders.

The former Red Sox icon is lucky to be alive after an alleged attempt on his life by a drug lord.  Pictures of Ortiz in the hospital following his six hour surgery in the Dominican Republic have surfaced.

One picture shows Big Papi in a hospital bed resting after surgery and the second one appears to show him being loaded into an ambulance before being flown to Boston. 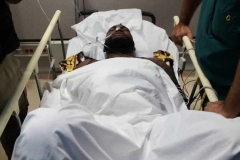 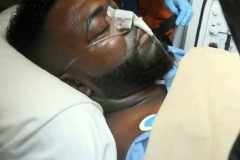 It’s good to hear he is recovering and is already up and walking around.  It’s also good to hear that he’s in Boston.  They play things a little fast and loose in the Dominican Republic.