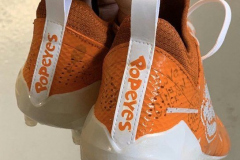 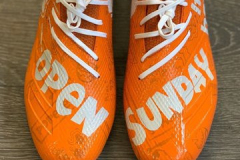 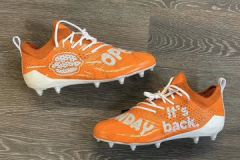 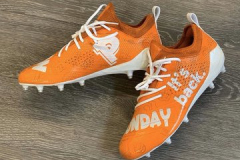 Popeyes continued its marketing campaign with two of the NFL’s most recognizable players Sunday.

Earlier this week, the fast food franchise announced that its highly-acclaimed chicken sandwich was making a return after a brief hiatus.

Houston Texans quarterback Deshaun Watson and Minnesota Vikings wide receiver Stefon Diggs are among the players to spread the word.

Watson was hit in the eye last week and it was still bloodshot for the team’s game in London Sunday. After the victory, the quarterback claimed it was the fast food chain that helped his eye heal.

He was not alone. Diggs wore cleats adorning the image of the fast food franchise during pre-game warmups.

Check them out above.

And Flip the Page to see a cool promo: